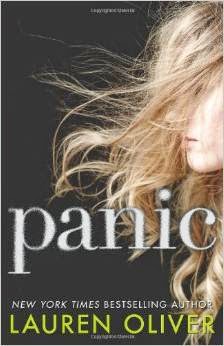 I raced through the book Before I Fall by Lauren Oliver, and when I read the synopsis to her latest book, Panic, it definitely piqued my interest. I took the book with me on vacation last week and quickly became immersed in the world of Carp, New York, and the teens who lived there and made the choice to participate in the survival game that the book is named after.

Synopsis:
Panic began as so many things do in Carp, a poor town of twelve thousand people in the middle of nowhere: because it was summer, and there was nothing else to do. Heather never thought she would compete in panic, a legendary game played by graduating seniors. She'd never thought of herself as fearless, the kind of person who would fight to stand out. But when she finds something, and someone, to fight for, she will discover that she is braver than she ever thought.

Dodge has never been afraid of panic. His secret will fuel him, and get him all the way through the game; he's sure of it. But what he doesn't know is that he's not the only one with a secret. Everyone has something to play for. For Heather and Dodge, the game will bring new alliances, unexpected revelations, and the possibility of first love for each of them—and the knowledge that sometimes the very things we fear are those we need the most.

My Thoughts:
The book is told from the perspective of two different narrators, Dodge and Heather. If done well, this set-up is a great way to build suspense in a book because you aren't exactly sure what the other characters are thinking, or in this case, are plotting. I easily related to the character of Heather, desperate to escape life from the Fresh Pines Mobile Home Park and fiercely protective of younger sister Lily. On the night of the annual Panic kick-off, she makes the rash decision to compete in the game after her boyfriend callously dumps her, figuring there's a lot she and her sister can do with the $67,000 cash prize. Heather's best girlfriend, Nat Velez, also competes in the game, but I found her character a lot harder to like. She's manipulative, moody, fickle, and uses people to get what she wants, including Heather. I absolutely loved Bishop, Heather's best "guy" friend who so clearly wants to be more, even if I did figure out his secret about halfway through the book. Dodge, the other character perspective we see, was also pretty likable, with revenge being his reason for competing in the game.

Speaking of the game, the challenges presented by the mysterious anonymous judges kept me holding my breath each time they appeared. Crossing a six-lane busy highway blindfolded in the dark? Stepping into a fenced in pasture with two tigers? Never in my lifetime! But desperate times call for desperate measures, I guess.

Oliver carefully weaves a tale of teen angst and survival with skillfully crafted setting and dialogue. I could easily picture the hardscrabble town of Carp and the desperation any teen would have to get out of there. The book has a dystopian tone even while set in a contemporary setting, which I know will appeal to many teen readers.
Posted by Renee Roberson at 3:13 PM