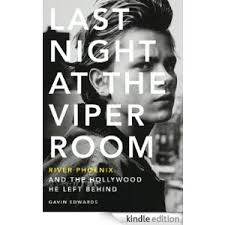 I have to admit that in my teens, I was an adoring fan of actor River Phoenix. "Stand By Me" continues to be one of my favorite movies of all time. I knew vaguely of Phoenix's background--that his parents had been "hippies" and he and his siblings lived in a commune for a while, and he didn't eat meat. Beyond that, I guess you could say I knew what he and his management allowed the public to know. I do know I was devastated (and shocked) when I learned of his death by drug overdose during my senior year of high school.

There was a lot we had no idea about. Times were different in the late 1980s/early 1990s. There weren't blogs to around to share the dirty little secrets of celebrities, and paparazzi didn't seem quite as aggressive as they do now. A few months ago I came across a show on the Reelz channel called "Autopsy: The Last Hours of River Phoenix." I was drawn in immediately. I think what struck me the most was that River didn't have to die in the early morning hours of Oct. 31, 1993 at the Viper Room in Hollywood. By all accounts he had been clean during the filming of his last movie, "Dark Blood," and decided to let loose that night. He had marijuana, valium, cocaine, and pseudoephedrine in his system (he was nursing a bad cold). He went to the Viper Room in the hopes of jamming on stage with Johnny Depp and Flea from the Red Hot Chili Peppers. The stage was too crowded and they couldn't let him perform. Even though he wasn't consuming alcohol that night, at some point he ingested a speedball (mixture of cocaine and heroine) in a liquid form. It was too much for his body to handle. Even though the nearest hospital was only a mile away, the group he was with didn't want anyone to know he was on drugs, so they sat with him as he more violently ill. No one called 911 until he started seizing, and by the time the paramedics reached the club it was too late.

One of the people interview for the Reelz program was Gavin Edwards, author of Last Night at the Viper Room: River Phoenix and the Hollywood He Left Behind. I found the book at the library a few days ago and picked it up. Edwards is a contributing editor for Rolling Stone and has also written for Details, Spin, and the New York Times Magazine. The book follows the life of Phoenix (born River Jude Bottom), from his humble early beginnings living with the questionable Children of God cult (which encouraged free love, even among young children) to his family's decision to have their children seek fame and fortune in Hollywood. I love how the book is structured--it reads like one long magazine article, featuring interviews from actors/directors Phoenix worked and pulling from previous media interviews. I learned so much reading this book, and it was heartbreaking. Phoenix never had a proper education, and he had trouble relating to kids his own age because he had not spent a lot of time with them in normal social settings. He most likely had dyslexia. His first love was music. He desperately wanted to be a musician, but acting did a better job of paying the bills. His work supported his entire family--he was the breadwinner. Although he talked about being "anti-drugs" in media interviews (he was also a devout vegan), he was first exposed to drug and alcohol use in his preteens on various movie sets.

The other thing I found interesting about Last Night at the Viper Room was how the author also wove in a timeline of other up and coming young actors in Hollywood (Johnny Depp, Leonardo DiCaprio, Tom Cruise, Brad Pitt, etc.) and what was happening in their careers as Phoenix's career progressed. For a pop culture junkie such as myself, this was just a bonus.

If he had been given medical attention earlier in the evening of Oct. 30, Phoenix might not have died that night. But with the downward spiral he was on, we can't really say if he would have lived any longer. Reading this book helped me understand how such a talented young actor could have become overwhelmed and led down the path he ended up on. I couldn't put this book down until I finished it, and then my heart hurt for a very long time afterward.
Posted by Renee Roberson at 10:39 AM 1 comment: