27 Days of Journaling to Health & Happiness 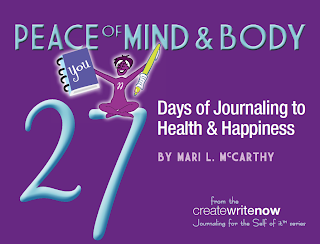 Isn't it funny how things sometimes land in your inbox just when you need them? I am a firm believer in synchronicity, and I think that is what led me to inquire about Mari L. McCarthy's 27 Days of Journaling to Health and Happiness workbook after seeing a Facebook post describing the course.

In the past year, I've been desperately trying to juggle my freelance writing career, polish up and submit two different children's novels, see to the needs of my family and put in some volunteer hours for various places and organizations where I can. What do you think happened this past fall? I crashed and burned, of course, coming down with a recurring case of strep that left me weakened, resentful and most of all, discouraged.

Mari L. McCarthy founded CreateWriteNow after journaling helped her restore feeling and function to her right side as a result of a damaging Multiple-Sclerosis (MS) flair up. She's gearing up for the 27 Days Life-Changing Journaling Challenge and if you are ready to take on the New Year with gusto, I would highly recommend signing up. The course is free with purchase of the workbook, which you can purchase here. Below is a description of the workbook:

The Peace of Mind & Body: 27 Days of Journaling to Health and Happiness guide takes you on a step-by-step journey to identify exactly what it is you want -- and how to get there. In just 27 days, you'll find yourself on a clear path to achieving the peace of mind, health and happiness you want for your life. Personal growth and development can be hard work, but this workbook makes it easy.
Learn how journaling can help you:

I received a copy of the workbook and have been flipping through the pages, trying to get myself mentally prepared for what the process will bring. When I saw that several of the exercises included music lyrics, I got pretty excited, as I've always relied on music to get me through the creative process of writing. Other exercises include exploring childhood memories, reflecting upon your dreams, keeping a food log, venting to your journal without censoring yourself, and more.

Are you ready for the challenge? Order your copy of the workbook, head out and buy a special pen and notebook specifically for journaling and sign up for the Jan. 1-27 challenge here.
Posted by Renee Roberson at 5:00 AM 1 comment:

Times They Were A-Changing Excerpt and E-book Giveaway 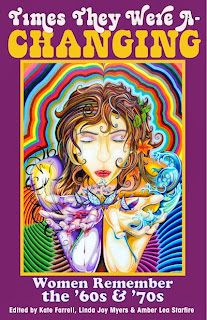 Today I am excited to share a special sneak peek at the fabulous anthology Times They Were A-Changing and offer up one e-book for giveaway.Take a look at the excerpt and see below for information on the book and the Rafflecopter form. And thanks for stopping by!

A heat wave smothered the city of Detroit the summer I turned  eighteen. Temperatures topped 100 degrees, and air-conditioning  was rare. Nothing moved in the stagnant air.

I was struggling to shed my “tomboyish” ways, something my  mother deemed essential if I was ever to “catch a husband.” Her turn  of phrase brought to mind a bug-eyed catfish flopping on a wharf, a  hook piercing his lip. This did not endear me to the marriage concept.  Nor did her warning that, under no circumstances, should I  ever compete with the opposite sex. Worse, if I found myself besting  a man, especially intellectually (impossible as that might seem), I  should retreat.

“Let him think he’s winning,” she said, dispensing her sapient  advice confidently. “You don’t want to humiliate him, do you? You’ll  never get a husband that way.”

Objections gurgled in my stomach. Don’t misunderstand. The  resistance I felt to her advice was not cognitive. It was a feeling state,  as if I teetered on the precipice of a great loss. Is it possible to grieve  an unknown in advance?

Disarmed with her influence, I sat in my new boyfriend’s shady  backyard sipping iced tea and, despite my best efforts at imitating   Grace Kelly, feeling every strand of hair kinking in the humidity.  Dick was an art teacher and six years older than I. It was imperative that I appear sophisticated and coy. I flipped the pages of Vogue  while Dick poured over the newspaper.

“Says here,” he snickered, “that some women plan to defy the Amateur Athletic Union’s ban on women running in men’s road races. Why do they have to do that? They ought to leave it be.”  My pulse sped up. Before I could stifle my impulsivity, I blurted,  “Why shouldn’t they run if they want to?”

A raised eyebrow projected a look of mild tolerance.

Synopsis:
Just in time for the holidays, Linda Joy Myers, Kate Farrell and Amber Lea Starfire launch their anthology Times They Were A-Changing: Women Remember the '60s and '70s. The book is the perfect gift for opening discussions with friends and family members and illustrating what a powerful time the '60s and '70s truly were.

Forty-eight powerful stories and poems etch in vivid detail breakthrough moments experienced by women during the life-changing era that was the ’60s and ’70s. These women rode the sexual revolution with newfound freedom, struggled for identity in divorce courts and boardrooms, and took political action in street marches. They pushed through the boundaries, trampled the taboos, and felt the pain and joy of new experiences. And finally, here, they tell it like it was.

Through this collection of women’s stories, we celebrate the women of the ’60s and ’70s and the importance of their legacy.

Times They Were A-Changing: Women Remember the ‘60s & ‘70s is available in print and as an e-book at Amazon, Barnes & Noble and She Writes Press and Indie Bound.

Find out more about the book online:

Times They Were A-Changing blog: http://www.timestheywereachanging.com 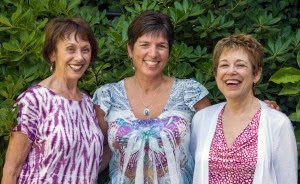 About the Editors:
Kate Farrell earned a M.A. from UC Berkeley; taught language arts in high schools, colleges, and universities; founded the Word Weaving storytelling project in collaboration with the California Department of Education with a grant from the Zellerbach Family Fund, and published numerous educational materials. She is founder of Wisdom Has a Voice memoir project and edited Wisdom Has a Voice: Every Daughter’s Memories of Mother (2011). Farrell is president of Women’s National Book Association, San Francisco Chapter, a board member of Redwood Branch of the California Writers Club, member of Story Circle Network and National Association of Memoir Writers.

Linda Joy Myers is president and founder of the National Association of Memoir Writers, and the author of four books: Don't Call Me Mother—A Daughter's Journey from Abandonment to Forgiveness, The Power of Memoir—How to Write Your Healing Story, and a workbook The Journey of Memoir: The Three Stages of Memoir Writing. Her book Becoming Whole—Writing Your Healing Story was a finalist in ForeWord Magazine's Book of the Year Award. A speaker and award-winning author, she co-teaches the program Write Your Memoir in Six Months, and offers editing, coaching, and mentoring for memoir, nonfiction, and fiction. www.namw.org. Visit her blog at http://memoriesandmemoirs.com.

Amber Lea Starfire, whose passion is helping others tell their stories, is the author of Week by Week: A Year’s Worth of Journaling Prompts & Meditations (2012) and Not the Mother I Remember, due for release in late 2013. A writing teacher and editor, she earned her MFA in Creative Writing from University of San Francisco and is a member of the California Writers Club in Napa and Santa Rosa, the Story Circle Network, National Association of Memoir Writers, and International Association for Journal Writing. In her spare time, she enjoys spending time outdoors. www.writingthroughlife.com

a Rafflecopter giveaway
Posted by Renee Roberson at 4:00 AM 4 comments: