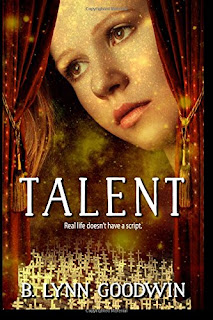 My curiosity about the book Talent was piqued as soon as I read the press materials from the WOW! Women on Writing blog tour. First off, contemporary young adult novels are one of my favorite genres to read. Second, I participated in musicals during my high school years and loved the idea of the stage as a main setting.

Synopsis:
Fifteen-and-half-year-old Sandee Mason wants to find her talent, get her driver's license, and stop living in the shadow of her big brother, Bri, who disappeared while serving in Afghanistan.
She discovers that real life doesn’t have a script as she deals with loss, the manipulation of Bri’s best friend, her burning ambition to find her talent and figure out what happened to Bri, and unexpected bits of joy that pop up when she least expects them. 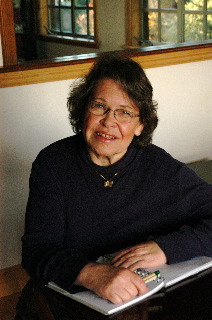 About the Author:
B. Lynn Goodwin is the owner of Writer Advice, http://www. writeradvice.com, and the author of You Want Me to Do WHAT? Journaling for Caregivers. She’s been published in local and regional newspapers, plus numerous magazines, anthologies, and online journals. A former drama and English teacher, she now conducts writing workshops, writes book reviews, edits, coaches writers, and is currently working on a second book about Sandee Mason’s adventures and a memoir about getting married for the first time at age 62 to a two-time widower who she met on…gulp…Craigslist. She lives with her husband, Richard, and her dog, Eddie McPuppers, in Northern California.

Review:
Talent hooks the reader from the opening pages, as fifteen-year-old Sandee Mason anxiously awaits her audition for her school’s production of Oklahoma! (I loved this part--I was in the ensemble Oklahoma! in my teens and couldn’t get the songs out of my head while reading.) It’s clear from the beginning that Sandee is searching for something of her own, after living in the shadow of her older brother Brian for so long. With Bri M.I.A. in Afghanistan, she is certain landing a part in the show will be her chance to shine in the spotlight.

Unfortunately (or fortunately, maybe!) Sandee ends up taking on a role she never imagined, and it bolsters her confidence and helps her forge new friendships while strengthening old ones. Goodwin definitely writes teenagers well—there is a well-rounded cast of characters that keeps you guessing at every turn. There’s the obnoxious diva classmate that has you rolling your eyes (Jenn), the boy-next-door/seventh grade boyfriend of Sandee’s that looks more attractive in each chapter (Diego), the moody stage manager and best friend of Bri (Rob), who also has his eye on Sandee, and several others. The character of Sandee was well written; there are times she displays an emotional maturity beyond her years and other times when her decisions made me cringe, just as any authentic teenager would actually behave. I also enjoyed reading about all the behind-the-scenes workings of the theater, too, as it brought back some great memories for me.

The author also paints a vivid and heartbreaking picture of a family struggling with the knowledge that their son has gone missing shortly after joining the military. Sandee spends much of her time at school and rehearsals because her home life has become non-existent. But she soon learns that most people are dealing with their own personal demons, and there are a few underlying mysteries sprinkled throughout the book that made me want to keep reading. Bravo to B. Lynn Goodwin for a fast-paced, heartfelt story of love, loss, and finding your place in the world.

Note: Read a fun interview with the author here. Be sure to check back on Wednesday, March 16, for a guest post from the author on how writers can use acting techniques to get inside of their characters.