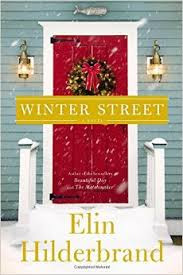 When I first heard Elin Hilderbrand had published a Christmas-themed book, Winter Street, I wasn’t as anxious to read it right away. Maybe it’s because one of the things I love about her novels is the image of Nantucket at its finest—during the warm summer months when anything seems possible. That said, when I stumbled across a copy of Winter Street a few weeks ago in my library, I didn’t hesitate to snatch it up.

Winter Street tells the story of former financial wizard Kelley Quinn, who now runs a bed and breakfast with his second wife, Mitzi. I laughed out loud in the opening pages when he catches his wife in a compromising position with the man who plays Santa Claus at their annual Christmas party. The novel is a quick read, as we follow Kelley’s story, that of his ex-wife, Margaret, now a famous news anchor, his children with his first wife (Ava, Patrick, Kevin) and his son with Mitzi, (Bart, who has just been shipped overseas as a member of the Marine Corps). Hilderbrand paints a vivid and snowy picture of Nantucket during the cold, winter months, and fills the inn with rooms and rooms of Christmas-themed memorabilia (most of which belongs to the somewhat flaky and materialistic Mitzi).

We learn how Kelley has invested in life’s savings into the inn, which currently has no paying guests, and he’s close to bankruptcy. Ava, a schoolteacher on the island lives at the inn and is in love with someone who has gone back to his hometown for Christmas with plans to visit with his now-divorced ex-girlfriend. Kevin, a bartender, has been secretly romancing the inn’s housekeeper, and Patrick has received glum news about his job that sends him packing home for Christmas without his wife and sons. No one can reach Bart in Afghanistan. Can the family pull together a find happiness despite their problems?

The book ends in such a way that you just know a sequel is in the works, and when I checked, sure enough, Winter Stroll is scheduled for release in October of this year. This time, I’ll be sure to pick this one up a little more quickly, as I’m interested to see how the Kelley clan is faring after the last book.
Posted by Renee Roberson at 4:30 AM