Guest Post and Giveaway from Eric Trant, Author of Wink

Today I am excited to welcome Eric Trant, author of the new thriller, Wink (#WINK). Eric has written a great post for us titled "Author Intrusion: Good or Bad?" Check it out below and see how you can win your own copy of Wink!

Eric W. Trant is a published author of several short stories, including "Apple Tree" and "One Small Step," and the novels Out of the Great Black Nothingand Wink.

Eric is an advocate for organ donation and lost his 18-month-old-son in May of 2012. Eric and his wife courageously donated their son’s heart, kidneys, and liver. The couple went on to begin a foundation to support organ donor families. Eric speaks openly about this emotional journey on his blog and the topic of organ donation is very close to his heart.

Find out more about the author by visiting him online: 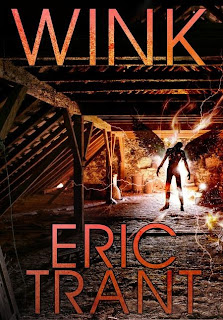 In this thriller set in a rural Gulf Coast town, Marty Jameson finds refuge in the attic from his mother's abusive rages. But only during the day. At night the attic holds terrors even beyond what he witnesses in his home. With a family made up of a psychotic mother, a drug-dealing father and a comatose older brother withering away in the spare bedroom, Marty feels trapped.


Next door, wheel-chair bound Sadie Marsh obsessively watches Marty's comings and goings from her bedroom window, despite her mother's warning about the evil in that house. Evil which appears to Sadie as huge black-winged creatures.

Marty, emotionally torn by the violence and dysfunction in his family, is drawn to Sadie and her kindly mother. But if he is to save his new friend from the supernatural horror threatening them all, Marty must transform himself from victim to hero. And to do so, he must first confront what lurks hidden in the shadows of his attic.

Wink is a thriller that captivates readers and leaves them longing for more. Trant is a talented author whose character descriptions go far beyond the physical.

Wink is available as a print and e-book at Amazon and Barnes and Noble.


Guest Post:
First off, what the heck is Author Intrusion, and why is it capitalized? I'm not sure why I capitalized it, and there isn't a good and hearty and reliable definition that I've found. As readers and authors we all have our ideas of what Author Intrusion is and what it ain't. Whatever definition, AI occurs when theauthor interrupts the reader, or tosses them. I prefer the term tossing the reader, because that is what I do when an author tosses me -- I toss their book across the room (or the more modern term, 'Remove from Device').


Now, the thing that tosses you that tosses the book that launches it across the room is AuthorIntrusion. For each of us that ignition signal which initiates the countdown begins with something different. I recall a series of books that I loved -- LOVED -- until the author fell in love with the heroine. The hero was a strong and strapping man in the first few books, and the heroine was not at all weak, but she was balanced with him and they were this great Luke and Leia pair of parallel heroes, each bringing to the story an aspect of manhood and womanhood respectively. Then about the third or fourth book he fell in love with the heroine. He doted on her with extra words, extra scenes, went on and on about how pretty she was, and my brother and I discussed it and realized he was in love with the heroine! He weakened the hero out of what we decided was jealousy to the point of him becoming an almost pathetic and bumbling nuisance.

I launched that last book (paperback, see) and have not picked up something since from unsaidauthor. He betrayed me. He intruded on ~my~ story.

So don't do that. Keep a professional distance between you and your characters and let them be who they will be, love die live and hate. Let them be! Do not intrude! Bad author!

I know, that's one example, falling in love with your characters, and here is another common one. Don't get too political. If your character has a set of beliefs, let them believe what they will. Do not make them into a pathetic and bumbling nuisance just because you do not share their beliefs. Be true to them and they will be true to the reader. If you want to become a pundit for a particular party or religion, go ahead, but remember you will alienate half your readers, enrage the other half, and the ones who are left will be people you do not want to meet in the dark back corners of your local library book signing.

Aside from falling in love with and imposing your beliefs on your characters, another thing authorsintrude upon is the action with long diatribes, soliloquies, and philosophical discussions. Now on this point I have a mixed opinion. Executed properly, you ~can~ intrude successfully here. Yes, sayeth I, GoodAuthor!

A fine example of Author Intrusion successfully delivered is just about any Heinlein book you read, or Hemingway, or McCarthy. If you want a modern example, watch a Tarantino movie, or read Life of Pi and The Art of Racing in the Rain. These writers pause the action for lengthy philosophical discussions between characters that often have no bearing on anything in the story other than the author wants to express to the reader a particular set of beliefs, or relate a funny or interesting side-story. This is AuthorIntrusion, and if written properly it can draw the reader deeper into the story almost as if the characters popped out of the book (or movie) and sat beside you and looked you in the eye and said, Heya Buddy, let me tell you a story.

As an author, you need to understand when your little voice is intruding into the story, and either rein it in or cut it loose and let it roam. It is a powerful tool when properly employed. Note my positive examples are from wildly successful authors with a penchant for the literary aspect of writing. When it is improperly used, though, it is a tool of destruction that will only alienate your readers. All in all it should be used with conscious caution, because a little whisper in the reader's ear from the author's tongue can have that lingering effect we all want as authors, which is that question: When is the next book coming out!? And whose tongue is in my ear?

What about you? Can you think of examples of Author Intrusion, or why it should be capitalized? Do you think it is something to employ, or avoid at all costs?

Thank you for hosting Eric and Wink this morning.

If someone only takes away a single thing from your post, I sincerely hope it is this quote: "Keep a professional distance between you and your characters and let them be who they will be, love die live and hate. Let them be! Do not intrude!"

You said this quite eloquently and it is so very true. Thank you for taking the time to share your thoughts with us.

Thanks Renee for hosting, and thanks Crystal for setting this up!

Renee, I know this was last-minute, so doubly appreciative that you were able to accommodate me.

No problem at all -- happy to have you here today! On the topic of author intrusion, I actually came across this recently in a memoir of all things. Yes, one would think memoirs should allow room for author intrusion, but this unnamed author went WAY over the top. We're talking rambling upon rambling until I could hardly figure out what the point of each chapter was. It was disconcerting to read how coldly the author watched her grandmother die a slow, painful death while literally cursing the same grandmother in the next paragraph. I eventually did throw the book down in disgust. I can think of other books that are guilty of this but most of them are fictional!

Hello Renee. Hello Eric. This was interesting and I agree with you. It is a shame to intrude too much at any juncture of the story, but as for me, Hemingway can intrude all he likes. But not many of us are Hemingway, unfortunately.
Oh, no, I see capcha codes below. This might explain the lack of comments. If mine doesn't take the first time I'm outta here. Most bloggers can't stand the things. The word is very difficult to read.

Denise,
Thank you for pointing out that capcha setting--I honestly didn't mean for that feature to be turned on. Fixed now!