A Snapshot in Time

I have a copy of Trisha Slay's Not So Long Ago, Not So Far Away to give away (only two more days left!), and the setting of the book reminded me a lot of the time I worked in a movie theater in high school. It was a fun job and I got to see so many free movies during that year, which thrilled the movie buff in me. I will always hold that time--and the people I worked with then--near and dear to my heart. But I also had an experience there that taught me an important life lesson I will never forget.

The lesson wasn't that unlimited refills of Cherry Coke and hot popcorn were a great perk of the job, although I still have fond memories of devouring those snacks while I worked on homework in the box office in between showings. An experience I had at this movie theater taught me to forever be aware of my surroundings and to always, always, trust my instincts.

I was working a late shift in the box office that night, and when I had arrived to work earlier that evening, the parking lot was already full. After circling the lot several times, I finally gave up and parked at the very end of the lot, thinking that I would make sure I got a co-worker to make sure I got to my car safely later that evening.

I can't exactly remember what time my shift ended, but it was well after the 9 and 10 p.m. showings. I noticed that a group of young men entered the lobby and loitered around the pay phones, but they never approached the box office for tickets. One of them made eye contact with me and smiled, but I felt uncomfortable. I was gathering my things and saying goodbye to a few of my friends that also worked with me, and sometime during that period, the guys left. It wasn't until I got into the parking lot that I remembered how far away my car was. The parking lot was pretty well lit, but I was still nervous because there weren't a lot of people around. I hesitated, trying to figure out if I should go back to the theater and ask one of the ushers to walk me to my car. I decided against it, because I was 17 years old and probably thought I was invincible. 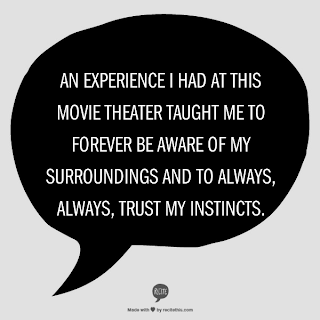 Around that time a van pulled up next to me and the doors slid open. The guys I had noticed in the lobby a few minutes earlier were grinning at me and laughing. One of them leaned out of the van and asked me if there were any good clubs around, because they were in town visiting and didn't know the local scene. My intuition told me they were lying, and that I needed to stall them. I could barely speak because my mouth was so dry. I am five feet tall and probably weighed about 90 pounds back then, so I was no match for them. I remember stumbling over my words and telling them about a few clubs for teens that were close by, all while a voice inside my head was telling me to get out of there. The guy who seemed to be the ringleader was inviting me to get in the van and go with them when I finally took a deep breath and said, "You know what? I forgot I left something inside."

I turned around and sprinted back toward the theater as fast as I could (thank you, hours of cross country practice!) Luckily, one of the ushers was standing just inside the lobby when I got there. I told him about the van, and he walked with me to see if it was still in the parking lot. As soon as the driver of the van saw I had someone with me, he took off out of the parking lot.

I am so grateful that I listened to my instincts that night and finally did get someone to walk me to my car. Those guys could have had only the best intentions, but I doubt it. If you are in a situation and you feel the hair on the back of your neck stand up, get out of there as soon as you can. Don't hesitate. These days I avoid getting myself in those types of situations if at all possible. Some people might call me paranoid, but I prefer to err on the side of caution. I encourage you to do the same.

Thanks to this post by Jane Hertenstein for giving me the inspiration to write a piece of flash memoir. You can learn more about this interesting type of writing in her book Freeze Frame: How To Write Flash Memoir.
Posted by Renee Roberson at 12:17 PM

This is super scary. I remember one time in the White Castle parking lot when I was like 14, a car drove up and the guy leaned out and said, DO YOU HAVE ANY DUBBAGE? (I'm probably not spelling that right.) And I had NO IDEA what he was talking about. And he freaked me out so I ran away to my friends inside. :) SO glad you listened to your instincts.

Dubbage? I have no idea what that is either! There are some very strange things that happen in parking lots (one day I'll tell you about a flashing incident I witnessed when I was a kid!) Glad you knew to get back inside to your friends. We ALWAYS have to trust those instincts and protect ourselves, and teach our daughters to do the same:)