Writing Prompt: What is Your Most Memorable Road Trip? 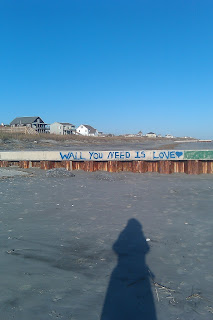 Driving home from the beach the Sunday after spring break probably wasn't the smartest plan, considering the rest of the free world had the same idea. Luckily, I wasn't driving, but while sitting in gridlocked traffic on the highway yesterday afternoon I started thinking about road trips. They are a rite of passage. Most of us have some sort of memories tied up with a road trip (or two, or three, or four!) They also make great topics for books, short stories, essays, etc. There is a Tori Amos song called "A Sorta Fairytale," and for some reason it always makes me think of this one road trip in particular.

And I'm so sad
Like a good book I can't put this day back
A sorta fairytale with you . . .

It was my senior year of college, and a friend of mine who was a year younger invited me to spend the weekend at the beach at his fraternity's spring formal. At first I resisted. I myself wasn't involved in a sorority, and as an introvert at heart, the idea of spending a weekend with a bunch of people I didn't know (even if it was to take place in a large house right on the beach) struck me as a nightmare waiting to happen. But he insisted, and my last year of college had been pretty stressful, so I finally gave in. We went on a few dates before the formal, I bought a dress, some shoes, packed my bag, and hoped for the best. We drove to Charleston, S.C. with another couple and had an uneventful trip. The first night there the four of us played a fun game of mini-golf where, lo and behold, I emerged as the winner. I decided maybe the trip wouldn't be so bad after all, even if my shyness was still preventing me from feeling truly comfortable. It didn't help that at age 21, I was one of the oldest girls at the event.

The next day was low key, and we all went to dinner at a restaurant in downtown Charleston. My date, who was and still is a very extroverted guy, spent a lot of time socializing, dancing, and hanging out with his friends, which I expected. I passed the time hanging out with another couple, who sort of took me under their wing for the weekend. Unfortunately, by the time we got back to the house that evening, where the party continued well into the night, my date had decided to make advances on another girl at the party, so needless to say, I didn't see him the rest of the night.

Finally, around 1 a.m.,  I managed to find a room to sleep in where a few other people had crashed. The next day, I didn't really see my date until it was time to drive home. I was pretty hurt by his actions and the car ride all the way back to the college was pretty awkward, since we were both sharing the backseat. I spent most of my time alternating between staring out the window and pretending to be asleep, and he pretty much did the same.

That trip, which had started out with so much promise, proved to be the end of our ill-fated relationship. Years later, he actually apologized for the way he treated me at the time, and we are now friends. But that trip made a lasting impression on me for some reason, and I always think of it when I hear "A Sorta Fairytale."

So here's a writing prompt for you. What is the best or worst road trip you've ever taken? What made it so memorable?
Posted by Renee Roberson at 9:04 AM