"I Never Had Any Friends Later On Like the Ones I Had When I Was Twelve . . ." 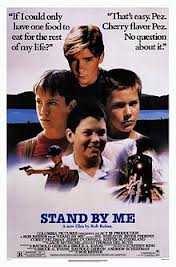 Having grown up in the 1980s, I have always loved the movie Stand By Me, and the Stephen King short story "The Body" that inspired the film. I've memorized the dialogue of the entire movie, and I never tire of watching it.

It's interesting how a film such as this one takes on more meaning the older you get. I remember being drawn to Wil Wheaton's character, "Gordie LaChance," from the very first time I saw the movie, but it is only now that I realize why I related to him.

Gordie was quiet, introverted, creative, and often teased for his daydreams and timid demeanor. In the movie, his brother Denny served as a buffer between Gordie and his overbearing and ambivalent father, but all that changed after Denny's death. I never had any siblings growing up, but often felt as if I had to stay in the background because I didn't have anyone my age I could relate my ideas and feelings to. Chris Chambers, played by the late River Phoenix, came from the wrong side of the tracks and carried the weight of his family's bad reputation on his shoulders. He had always been told he would never amount to much, and he believed it. I too, struggled with feelings of low self-worth all throughout my childhood, and still do from time to time.

An older Gordie, played by Richard Dreyfuss, actually narrates "Stand By Me," telling of the adventure the boys had when they went off in search of a young boy's dead body in the woods. I think that's one of the aspects of the movie that strikes me now, as I am working as a professional writer and am finally starting to consider opening up and telling some of stories from my own past.  I'm sure most of us have experienced the ebb and flow of various friendships, just like the four characters in the story did.

I find it haunting that as the film ends, and the older Gordie describes how he read about the death of Chris Chambers, the image of a young River Phoenix walking down the road fades. As we all know, River Phoenix passed away at the young age of 23.

We all have our own "coming of age" stories to tell, and this is the one I relate to most for some reason. There have been friends in my life that may not still be around, or that I don't talk to as often as I'd like, but they made a lasting impression on me during the time we spent together.

What part of "Stand By Me" resonates with you the most?
Posted by Renee Roberson at 1:55 PM