Guest Post by Jadie Jones: The Three E’s of Romance and Relationships in YA

Today I'm pleased to welcome author Jadies Jones, in support of her blog tour for The Moonlit Trilogy. As an avid YA reader and aspiring YA novelist myself, I knew her post on romance and relationships in young adult literature would be a great read--and she didn't disappoint. Read Jadie's post below and see how you can win your own copy of the first book in the trilogy!

As we all know, romance and relationships can get really, really messy. This mess becomes even more tangled when you add a third party in the mix, and in the case of young adult fictional relationships, the third party is the reader. Our emotions respond to these characters as we begin to invest and trust in them. We have expectations for how the relationship will unfold, and how fast. And our environment shapes what we deem acceptable for these two fictional love birds as their romance progresses.

Do writers owe readers a protected, empowering, literary-romance experience? I don’t think so. But I do think we writers owe readers reality, and that we have a responsibility to make our characters truly, utterly responsible for the choices they make, even when it’s not pretty.

Emotions: While it’s a controversial subject, I cast my vote in the belief of infatuation at first sight, especially for teen characters. As adults, we can look at these doe-eyed situations and roll our been-there-seen-that eyes all we want, but I well remember walking into third period graphics arts on the first day of my freshman year in college, and spotting a blond haired, ice-blue eyed boy with a dimple in each cheek and a grin that lit up the room. I remember nothing else about that day.

Teen characters are experiencing these emotions for the first time, and, on the cusp of adulthood, coming to a budding understanding that the actions we take and the relationships we make have the potential to affect our lives forward for a very long time. I know that from that day forward for the rest of the semester, my heart sped up on the walk from the cafeteria to graphic arts. And I remember the one time he stopped by my desk to compliment me on a project (I have no idea what I’d made.)

I also remember the gnawing stress of guilt when, in my senior year, my religion and my first serious relationship were at a crossroads. I remember feeling suffocated by either option. The relationship didn’t survive the weight, and it took me a long time to be able to sift through the debris with any real perspective. As these fictional characters come to similar moments on their romantic journeys, it is imperative a writer explores the internal consequences, both positive and negative, of choices made.

Expectations: The “expectation” factor applies particularly to the timing in a YA relationship. Our protagonist experiences an initial flutter of emotion in the presence of the will-be-love-interest. In our minds, we have an expectation as to what comes next, and how quickly. How long before a first kiss? Do we expect the love to make our protagonist more or less impulsive? Do we expect them to never make mistakes? To never hurt each other? Do we expect a literary romance to run a perfect course? And what the heck is “perfect,” anyway?

The idea of “perfect” is different for all of us. A good friend of mine expected guys she dated to coordinate their outfits for nights on the town. That’s about as far from my perfect as you can get. Another friend of mine expected her boyfriend to propose on Christmas in front of her entire family. That sounds absolutely horrifying to me. We bring these experiences with us into the first page of a new book, which shapes what we expect from the characters therein. The author is bringing his/her own experiences and expectations to the same dynamic, turning the triangle into a square.

Environment: External pressures and reactions also have a big impact on relationships both fictional and in real life. How do the people closest to you or the main character feel about the relationship itself and/or the decisions the protagonist makes because of the relationship? I saw a great video about how the six people you spend the most time with will begin to impact what you deem acceptable, and I believe this to be absolutely true. So who does the protagonist hang out with, and how does this environment respond with the introduction of the love interest? What advice do his/her besties offer? How does the advice make the character feel? How does the protagonist’s home life/relationship with parents/etc. affect the boundaries or lack thereof in regards to the romance?

Outside stress can also fast-track the timing of a relationship. Suddenly each moment seems more critical, something you have to grab out of the air before it flies away. This mirrors itself in real life. Take my grandparents, for example, who met in the throes of World War 2. Days after they met, they were engaged. They married months later. My Nana would’ve had it sooner. She and my grandfather went to the local court house and tried to convince the judge she was 18, but the judge wasn’t having any of it. He deployed soon after they married, and I imagine each moment they had together, in person and through letters, was like a fire consuming everything in its path, burning the oxygen from the air. And typically, a protagonists and/or his/her world is experiencing some kind of new external stress in some way, or there wouldn’t be much of a story.

Throughout my life, books have been where I go when I don’t want to feel alone. I find solace in characters who have had similar thoughts/experiences/conflicts/yearnings. So now, as a writer, I want to give readers characters who will sit down with them and hold their hand and be quiet and be still, so that for just a moment, that reader knows someone else out there gets it; someone else out there went through it and made it to the other side. And I do believe we owe our readers a realistic look at the entire journey. 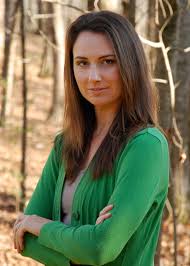 About the Author:
Jadie Jones wrote her first book in seventh grade, filling one hundred and four pages of a black and white Mead notebook. Back then she lived for two things: horses and R.L. Stine books. Fast forward nearly twenty years, and she still work with horses. It’s amazing how much changes... and how much stays the same.

The dream of publishing a novel has hitchhiked with Jadie down every other path she‘s taken (and there have been many). Waitress, farm manager, road manager, bank teller, speech writer, retail, and more. But that need to bring pen to paper refused to quiet. Finally, in 2009, she sat down, pulled out a brand new notebook, and once again let the pictures in my head become words on paper.

Confession time: Jadie Jones is a pen name created to honor two fantastic women who didn't get the chance to live out their professional dreams. First, Jadie’s grandmother - a mother of four during post World War II America, who wanted to be a journalist so bad that even now when she talks about it, her blue eyes mist and she lifts her chin in silent speculation. And second, a dear friend's mother who left this world entirely too soon. To Judy Dawn and Shirley Jones, Jadie Jones is for you. It's been a pleasure getting to know her.

Moonlit is the story of eighteen-year-old Tanzy Hightower knows horses, has grown up with them on Wildwood Farm. She also knows not to venture beyond the trees that line the pasture. Things happen out there that can't be explained. Or undone. Worse, no one but she and the horses can see what lurks in the shadows of the woods. When a moonlit ride turns into a terrifying chase, Tanzy is left to question everything, from the freak accident that killed her father to the very blood in her veins. Broken and confused, she turns to Lucas, a scarred, beautiful stranger, and to Vanessa, a charming new friend who has everything Tanzy doesn't. But why do they seem to know more about her than she knows herself? 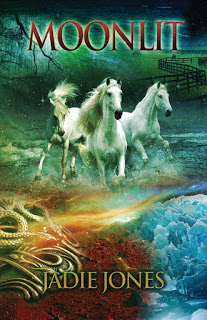 Tanzy's journey continues in Windswept, the second installment of the Moonlit Trilogy when Tanzy is the key in an ancient prophecy pivotal to the existence of all beings, both Seen and Unseen. Unseen who have waited a millennium for her birth are relentless in their efforts to see the prophecy fulfilled--whether for good or evil, depending on which side of the conflict one stands. Others have sworn an oath to end Tanzy's existence, permanently. Already, Tanzy's body has been compromised by her enemies, her veins now home to the blood of a wild horse whose instincts are becoming impossible to control. While Tanzy's Unseen enemies work to draw her out of a remote safe house, her friends beg her to stay in hiding. Tanzy is torn, wanting to reunite with Lucas, who has loved her since her first incarnation, yet unsure whether fulfilling the ancient prophecy will protect those she loves or destroy them. 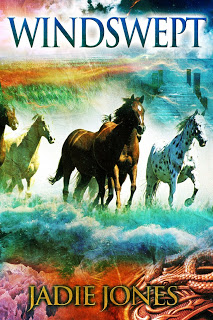 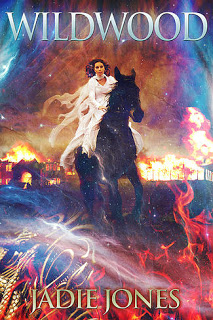 In Wildwood, the third book of the Moonlit Trilogy, Tanzy's journey races toward a final battle within the Unseen. Tanzy Hightower has crossed the veil and entered the Unseen world to fulfill the destiny she has at last embraced, to either seal or destroy the veil between the Seen and Unseen worlds. She is the only mortal in a land teeming with creatures who want her dead. To stay alive long enough to stop Asher, the most powerful of the Unseen, Tanzy accepts his marriage proposal and seeks refuge inside his palace. On the Seen side of the veil, Tanzy's allies are fragmented and lost, without leadership. They must gather forces and train an army of candidates to defend their world against unfathomable predators poised to strike should the veil holding them at bay dissolve. While Tanzy has accepted her own inevitable death in fulfilling her destiny, her closest friends refuse to stop searching for the impossible: a way to save Tanzy's life.

Win your own copy of the book that started it all, Moonlit! Enter the Rafflecopter form below. Good luck, and thanks for stopping by!

a Rafflecopter giveaway
Posted by Renee Roberson at 4:30 AM

Thank you so much for having me and for your support of the Moonlit Trilogy!