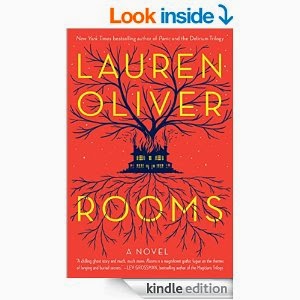 Synopsis:
The New York Times bestselling author of Before I Fall and the Delirium trilogy makes her brilliant adult debut with this mesmerizing story in the tradition of The Lovely Bones, Her Fearful Symmetry, and The Ocean at the End of the Lane—a tale of family, ghosts, secrets, and mystery, in which the lives of the living and the dead intersect in shocking, surprising, and moving ways.

Wealthy Richard Walker has just died, leaving behind his country house full of rooms packed with the detritus of a lifetime. His estranged family—bitter ex-wife Caroline, troubled teenage son Trenton, and unforgiving daughter Minna—have arrived for their inheritance.

But the Walkers are not alone. Prim Alice and the cynical Sandra, long dead former residents bound to the house, linger within its claustrophobic walls. Jostling for space, memory, and supremacy, they observe the family, trading barbs and reminiscences about their past lives. Though their voices cannot be heard, Alice and Sandra speak through the house itself—in the hiss of the radiator, a creak in the stairs, the dimming of a light bulb.

The living and dead are each haunted by painful truths that will soon surface with explosive force. When a new ghost appears, and Trenton begins to communicate with her, the spirit and human worlds collide—with cataclysmic results.

Having read Oliver's Before I Fall and Panic and really enjoying both, I was excited to read Rooms, mostly because of the presence of ghosts, something I write about in my own fiction. Unfortunately, it fell short of my expectations.

What worked: The concept of the book is brilliant and kept me turning the pages. Who doesn't wonder about the history of a house? The Walker house is old and full of hidden secrets, and in the different sections of the book, Oliver leads the reader through the various rooms of the house: the kitchen, the study, the basement, the bathrooms, the attic, etc. It's a very unique way to craft a story.

What didn't work: The book is narrated in first person by the two ghosts residing in the house, Sandra and Alice. I've read other reviews that the two women's voices weren't distinct enough, and I have to agree. Both women had destructive relationships with men and I became confused about which man was connected to which ghost. I often found myself having to flip back to the beginning of their chapters so I could keep the narrator straight. Also, once I finished the book I still had a lot of questions about the two women--I'm not sure if I missed the story of how Alice died. If it was in the book, it wasn't given as much attention as Sandra's death. The rest of the book is told in third-person through the POV'S of Richard Walker's daughter Minna, her daughter, Amy, Walker's son, Trenton, and their mother, Caroline. The switching back and forth of all these POVS disrupted the flow of the book and prevented me from staying grounded in any sort of timeline. Richard Walker's voice is also notably absent--and I couldn't quite understand why his family hated him so much. The nymphomaniac Minna was probably my least-favorite character. The ending also wasn't much of a surprise to me.

I enjoy Oliver's writing and will continue to read her books, but I felt like Rooms required an additional two or three readings to fully differentiate each character's individual stories.
Posted by Renee Roberson at 8:20 AM

Interesting. I may skip this one, then, or at least wait a while to read it (the books to review in my apt are approaching hoarder levels, lol). Thanks!