Seven Days of Hilderbrand: The Matchmaker 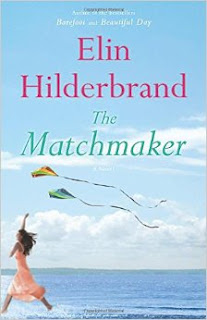 Even though it came out last summer, I only read The Matchmaker a few months ago. As a self-proclaimed Elin Hilderbrand fan this is painful to admit, especially because I believe this to be one of her best works.  And when I did finally download it to my Kindle, I finished it in two days and suffered from what I like to call a "book hangover" afterward.

As with most of Hilderbrand's main characters, Dabney Kimball Beech definitely has her flaws. After her mother abandoned her at a young age, she finds herself unwilling to leave the island of Nantucket at all (except for four years away at college). She has a special gift for matchmaking. If a couple is "a perfect match" she sees a rosy color around them--and if they aren't a match, an unfortunate murky green. She finds her own true love at an early age with Clendenin Hughes, also nicknamed "The Beast," but when he receives the job opportunity of a lifetime in Southeast Asia, her fear of leaving the island prevents her from going with him. Pregnant, she decides to raise the child alone, and never gets over the loss of Clen. She finds security by marrying an older college professor from Harvard, John Boxmiller "Box" Beech, and he raises Dabney's daughter Agnes as his own.

At the start of the book, 48-year-old Dabney is content in her job as the executive director of the Nantucket Chamber of Commerce. Her husband flies home to Nantucket on the weekends and they have a perfunctory relationship.  Agnes is grown and engaged to a man almost Dabney's age, and Dabney can instantly tell there are problems brewing beneath a happy facade. But when Dabney receives an e-mail from Clendenin Hughes announcing that he has suffered a loss and is back on the island, she is shaken to her core. Thus begins a summer filled with stolen moments, conflicting emotions, and a health issue that Dabney can't quite shake.

This novel was filled with distinct and lovable characters, which made me want to keep turning page after page. One my favorites was Riley Alsopp, the dentist-in-training with the "perfect teeth" interning at the Chamber for the summer. I also had a soft spot for Dabney's husband, Box, who had no idea of the consequences of neglecting his marriage for work. Nina Mobley, Dabney's best friend and assistant at the Chamber of Commerce, is also funny and earnest. The only character I truly detested was C.J., Agnes' finance, and that was completely by design.

The Matchmaker is full of all the usual Nantucket staples we've become accustomed to, down to the descriptions of the fall and spring festivals, the makings of a perfect 4th of July picnic, and a dazzling cocktail party overlooking the harbor. It was after reading this novel that I finally convinced my husband that I have to see Nantucket once and for all, and we are heading there for our wedding anniversary in mid--September.

Disclaimer: If you're a sap like me, you are going to want to have a box of tissues handy in the final chapters of this book.
Posted by Renee Roberson at 1:08 PM

I'm loving your Seven Days of Hilderbrand, Renee! Excellent reviews. I'm truly embarrassed to say I haven't read any of her books, even though we interviewed her for WOW a few years ago. =/ Since I'm looking for some good summer reading, I think I'll pick up The Matchmaker after reading your review. Do you think that's a good one to start with?

Oops! Forgot to click the button for email follow-up comments. Doing that now. :)

Hey Angela! So glad you are enjoying these. I would recommend The Blue Bistro to start with--it's my absolute favorite. The Matchmaker is great too but it's a little heavier :-)